From Oxygen Not Included Wiki
Jump to: navigation, search
This article may contain outdated information that is inaccurate for the current version (Cloud Saves). It was last updated for the Launch Update.
This article is related to content of the Base Game, there may be a version of this site for the Spaced Out DLC, see Biome (Spaced Out).

Biomes are regions in Oxygen Not Included. There are 11 different biomes in the game. Each contains different resources, critters, and plants, and are mostly separated by veins of Abyssalite. Biomes have been reworked for the Spaced Out DLC, see Biome (Spaced Out).

Although each biome has a color shading applied to it that stays after the biome is mined out, there are no special properties beyond the contents of the biomes (so, for example, the Frozen biome does not cool itself, only starting out cold and cooling through Wheezeworts, which can be removed).

Each Asteroid Type contains 8 Biomes, with the exception of Rime Asteroid which contains 10 Biomes.

The location of each Biome varies depending on the Asteroid Type. See corresponding Asteroid Type for more details.

The above table shows only what is primarily generated in these biomes; there are some exceptions: 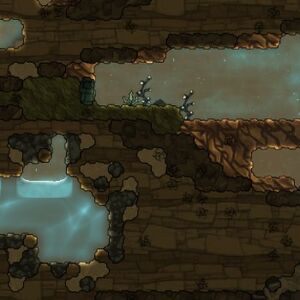 The Temperate Biome is the place where Duplicants start. It contains clean Water, Dirt, Sandstone, Sand, Coal, Algae, and Copper Ore (which provides a small decor boost). The Muckroot, Mealwood and Bristle Blossom plants growing naturally here will provide food until other Food options are researched. The player is guaranteed to start with at least five accessible tiles of Oxylite, which should produce sufficient Oxygen for the Duplicants to survive until Oxygen generation structures have been researched. Algae found here will last for about 20 or more cycles after that. Shine Bugs and Hatches can be found in this biome. The Temperate biome is bordered by a mixture of Granite and Igneous Rock, and is located in the center of the map, surrounded by the other biomes.

Swamps are warmer and have cavities full of Polluted Oxygen, often under high pressure. Pools of Polluted Water and dug up Slime will add even more Polluted Oxygen. Players can find more Algae here, useful if its still needed for Oxygen generation. The Slime can be converted to Algae as well. The primary rock is Sedimentary Rock, which can be mined quickly due to its low hardness. The Gold Amalgam found here is the most heat-resistant Metal Ore. Dusk Caps and Thimble Reed grow here, the latter of which is crucial for the production of Clothes and other useful things,such as exosuits and canvas production.

Mining swamps can take a long time, due to the slime, which contains Slimelung disease, that harms duplicant productivity. Pufts and Pacus can also be found in this biome.

This biome is hot but habitable, and here the player can find Pincha Pepper plants that produce Pincha Peppernut for the Gas Range, as well as Balm Lilies which can be used to make Medical Packs. The Chlorine and Hydrogen gases in the cavities here are unbreathable. The Bleach Stone found here is useful to keep the Duplicants happy with a Hand Sanitizer, and Phosphorite is used as a fertilizer for Pincha Pepper. Caustic biomes often have large veins of Coal, Igneous Rock, Algae, and Iron Ore (which has no special properties compared to other Metal Ores). Morbs can be found here as well. In one caustic biome, there will be either a single Chlorine Gas Vent, the only renewable source of Chlorine, or a second Natural Gas Geyser. Dreckos are often found in this biome near Balm Lily and Pincha Peppernut plants, they can be alternative source of Reed Fiber. 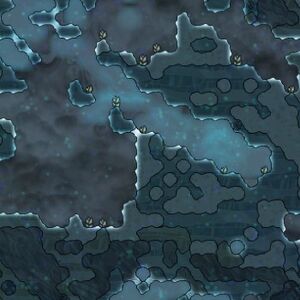 In this biome, Hypothermia can strike Duplicants without Warm Sweaters (which can be made in a Textile Factory). The temperature ranges from -20 to -40 °C. It contains large amounts of liquifiable Ice, Polluted Ice, and Snow, as well as veins of Granite and Wolframite (both notable for their excellent Heat transfer abilities). For gases, there is Carbon Dioxide and some Oxygen. Players can find Sleet Wheat and Wheezewort plants here. Frozen Biomes are not generated directly next to starting biomes.

Anti Entropy Thermo-Nullifiers found in Frozen Biome can help cooling the base.

Rust and Salt are alternative Oxygen sources when water electrolysis is not feasible.

It is located right above the volcanic biome. The temperature is ~80 °C (on the top) and up to 380 °C (on the bottom). It contains Crude Oil, Oil Reservoirs, veins of Diamond, Granite, Lead and Iron Ore and pockets of Natural Gas and Carbon Dioxide. It is inhabited by Slicksters.

If the asteroid has Irregular Oil trait during world generation, the Oil Biome may appear anywhere in the map.

Volcanic biome appears at the very bottom of the map. It only contains liquid Magma (about 1600 °C), Obsidian and Neutronium which can't be destroyed. 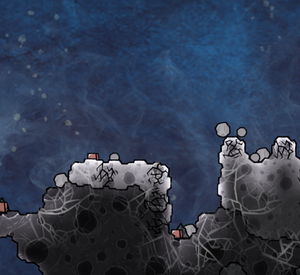 The surface of asteroid. It contains Mafic Rock, Regolith and Granite in the upper layers, and Igneous Rock can be found in the lower layers.

Gases and liquids are sucked into the vacuum of space through the open background, and in the absence of gases heat can not dissipate from materials and objects. Adding Drywalls helps to construct rooms that can hold air and liquid.

This biome is filled with generic rocks, and lacks any features.

Electrum Biome is no longer used in current game as of Launch Update.

Electrum biome appeared on the top of the map in the first Helicona preset and in the second preset, it appeared as world border. It contained huge pockets of Electrum and Vacuum. In Helicona 2 preset there occurs Iron Ore and Copper Ore is not completely surrounded by Neutronium.